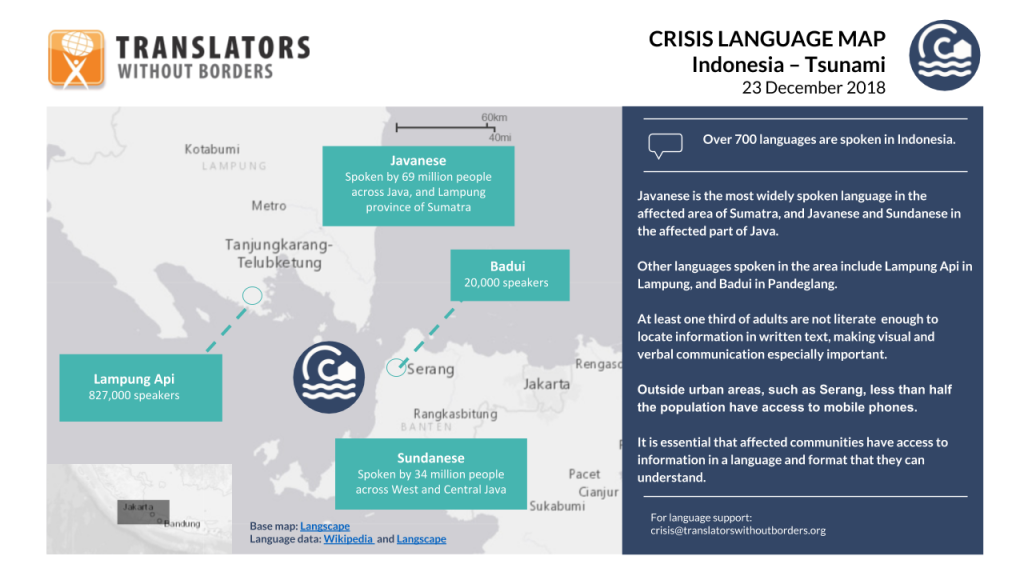 A tsunami struck beaches along Indonesia’s Sunda Straits on the evening of 22 December. Twenty-four hours later, at least 222 people were confirmed killed and 843 injured, and more were missing. Hundreds of buildings and homes along the coast on the islands of Java and Sumatra have been destroyed by the force of the wave. The casualties occurred in three regions — South Lampung in Sumatra and the Serang and Pandeglang regions of Java, west of the capital Jakarta — along the Sunda Straits. An alert is in place for potentially destructive tide waters over 24-25 December.

Indonesia is one of the most linguistically diverse countries in the world, with more than 700 languages in addition to the lingua franca Indonesian. The most widely spoken languages in the affected area are Javanese and Sundanese, spoken by more than 84 million and 42 million people respectively. More than 800,000 people in the Lampung area of Sumatra speak Lampung Api, while ethnic Chinese in Lampung speak Hakka Chinese. Around one-third of Jakartans are not sufficiently literate to locate an item of information in texts or determine the meaning of a sentence. The proportion is likely to be higher in rural areas and among women and ethnic minorities. This makes the use of simple language, pictures, and audio formats particularly important.

In times of need, communication with communities is key. Yet emergencies can strain local communication infrastructure, and those who provide language services may themselves be affected.

To alleviate suffering and contribute to rapid recovery, it is important to get life-saving information to communities quickly, including through radio broadcasts and mobile technology, in the languages of those affected. To ensure understanding among less educated individuals and second-language speakers, communication should be short, simple, and clearly illustrated. Important information — including how to access services and where to report abuse — should be provided in plain language, absent of jargon, and with pictures when possible.