The 2011 census of Armenia records 16 main languages and dialects spoken in the country. The census indicates that Armenian, the country's official language, is the most widely spoken as a first language (97% of the population); it is used in education, administration and public life. Armenia has gone further than neighboring Azerbaijan and Georgia in removing the Russian language from public communication after the fall of the Soviet Union. Still, Russian is the most widely spoken second language (89% of the population). Kurmanji is the largest minority language in Armenia: it is spoken by 1.3% of the population, mostly in Armavir and Aragatsotn Provinces.

Explore the data by province here. 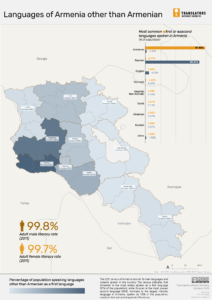 Static map highlighting the most common languages spoken in Armenia. Data is from the 2011 census. 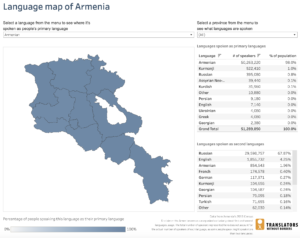 Interactive map showing the number of speakers and geographic spread of different languages in Armenia. Data is from the 2011 census.