The 2010 census of Ecuador records 13 languages. Around 97% of Ecuadorians speak Spanish. Today, Spanish spoken in Ecuador has 3 distinct regional variations: Amazonic, Andean, and Equatorial Coastal. The most widely spoken variants are Andean Spanish, spoken in the highlands, and Equatorial Coastal Spanish, spoken from the northern border with Colombia to the southern border with Peru. These regions are the most heavily populated in the country.

Quichua, a local variant of Quechua, is the second most commonly spoken language (5%), followed by Shuar (1%); these are also used for communication between speakers of different languages. The largest concentration of Quichua speakers can be found in Chimborazo Province. Quichua is also taught as part of the national curriculum.

Shuar belongs to the Jivaroan language family and is spoken by around 35,000 people. Shuar speakers are concentrated in Morona Santiago and Pastaza Provinces, in southeastern Ecuador. Eleven other Indigenous languages are also spoken. These are the first languages of some 28,000 Ecuadorians, largely in northern Ecuador.

In urban areas of the country, especially the coastal region, most people are monolingual and only speak Spanish. Indigenous languages are spoken at higher rates in rural areas.

Explore the data by canton here. 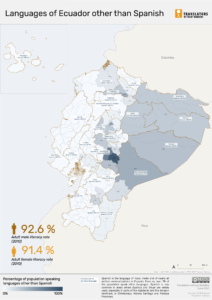 Languages of Ecuador other than Spanish: Static (EN)

Static map highlighting the most common languages spoken in Ecuador besides Spanish. Data is from the 2010 census. 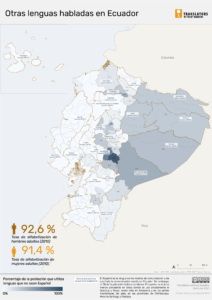 Languages of Ecuador other than Spanish: Static (ES)

Static map highlighting the most common languages spoken in Ecuador besides Spanish. Data is from the 2010 census. 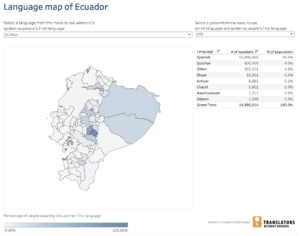 Interactive map showing the number of speakers and geographic spread of different languages in Ecuador. Data is from the 2010 census.