The 2007 census of El Salvador records 8 main languages spoken in the country besides Spanish, which is the official language. According to the 2007 census, some Indigenous groups speak their own languages, such as Cacaopera (spoken by 0.07% of the population) and Nawat (0.06%). Other sources suggest that Poqoman is among the most widely spoken Indigenous languages in the country, while Cacaopera would actually be extinct, and we have been unable to verify these discrepancies. The census also indicates that Q'eqchi' is spoken by Indigenous immigrants of Guatemala and Belize living in El Salvador. The wording of questions asked in the census makes it impossible to verify whether any sections of the population are monolingual in languages other than Spanish.

Like other regions of Central and South America, Salvadorans use voseo. This refers to the use of the pronoun vos for the second person singular, instead of tú. The form of Spanish used in El Salvador is called Caliche, which is considered informal.

Explore the data by municipality here. 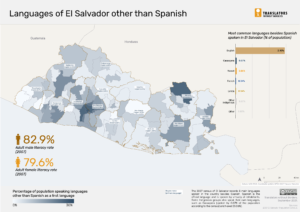 Languages other than Spanish in El Salvador: Static (EN)

Static map highlighting the most common languages besides Spanish spoken in El Salvador. Data is from the 2007 census. 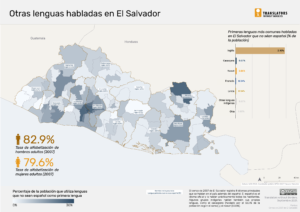 Languages other than Spanish in El Salvador: Static (ES)

Static map highlighting the most common languages besides Spanish spoken in El Salvador. Data is from the 2007 census. 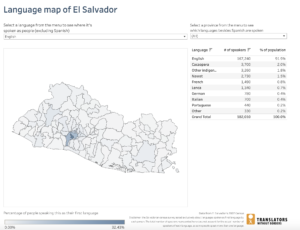 Interactive map showing the number of speakers and geographic spread of different languages in El Salvador. Data is from the 2007 census.