Seventy-nine languages are spoken in Mali, but the 2009 census only lists 15 languages. Bambara (also known as Bamanakan or Bamanan) is the first language for half the population, and the most widely spoken language in the country. French - which remained the official language after independence - is not included as a first language in the census, but is the primary language of instruction in schools. Bambara, French, Fulfulde and Songhay are used as lingua francas in different parts of the country. 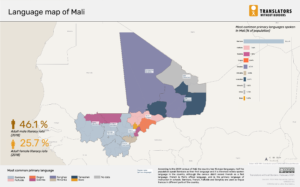 Estimates of the number of people who speak French are low: 2009 census data indicates that 33.7% of men and only 21.5% of women are literate in French.

Bambara is spoken by 50.3% of the Malian population as their first language, mainly in central and southern Mali. The 2009 census does not indicate what proportion speak Bambara as their second or third language, but data from Ethnologue suggests that it may be as high as 96% of the population. Bambara is also spoken in Burkina Faso, Côte d'Ivoire, Gambia, Ghana, Guinea, Senegal and Sierra Leone. It can be written using the Latin, N'Ko or Arabic alphabet; Latin and N’Ko are the scripts used most commonly in Mali.

Many regions of the country are linguistically diverse. In the Ségou region, people speak up to seven different languages as their mother tongue. Literacy rates, averaging 35% nationwide in 2018, are markedly lower for women than for men, especially along the border with Senegal, and lower for people aged over 65 (26%). In the cercles (districts) of Kayes, Kéniéba and Bafoulabé, the literacy gap between men and women is as high as 21%.

Static map highlighting the most common languages spoken in Mali. Data is from the 2009 census. 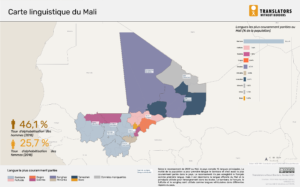 Static map highlighting the most common languages spoken in Mali. Data is from the 2009 census. 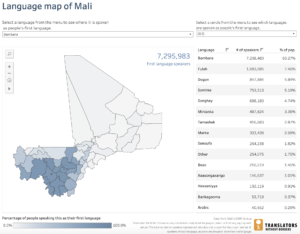 Interactive map showing the number of speakers and geographic spread of different languages in Mali. Data is from the 2009 census.