The 2021 Joint Multi-Cluster Needs Assessment (JMCNA) for Somalia records 11 languages in use. The JMCNA indicates that Northern Standard Somali is the most widely spoken as a first language (60% of the population), followed by Maay Somali (20%) and Benadiri Somali (18%). The country's official languages are Northern Standard Somali and Arabic, but Arabic is used chiefly in religious practice, and for more than 39% of the population, neither is the main language used at home.

Other minority languages include two Swahili dialects: Bravanese (also known as Chimwiini or Chimbalazi), spoken along the southern coast, and Bajuni or Kibajuni. Mushunguli (or Mushungulu), spoken by the Bantu minority of southern Somalia, is also spoken in Tanzania, where it is known as Zigula or Zigua. An unknown number of people use Somali Sign Language.

English is widely taught in schools and the language of instruction at many Somali universities; it is also a working language of many Somali NGOs. Italian, previously an official language, is now spoken chiefly by older people and government officials.

The 2021 JMCNA was conducted by REACH Initiative. As sampling was not random, the confidence level and margin of error cannot be calculated. Results are therefore indicative rather than representative. However, the targets for the number of surveys (13,000 households) by population group (households living in and outside sites for internally displaced people) and district were based on the JMCNA 2020 methodology, which set the target number of surveys at a 90% confidence level and 10% margin of error. The exercise covered 74 districts across 17 regions in Somalia.

Explore the data by district here. 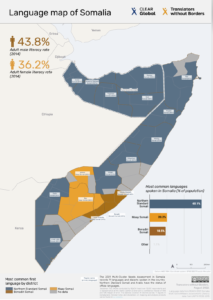 Static map highlighting the most common languages spoken in Somalia. Data is from the 2021 JMCNA. 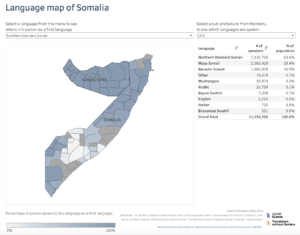 Interactive map showing the number of speakers and geographic spread of different languages in Somalia. Data is from the 2021 JMCNA.