There are between 350 and 430 languages spoken in the United States of America, making it one of the most linguistically diverse countries in the world. While there is not an official language at the federal level, many states have adopted English and other indigenous languages as official. According to the 2018 American Community Survey, over 78% of the population only spoke English at home. There are over 40 million Spanish speakers in the US, meaning only Mexico, Colombia, Argentina and Spain have more Spanish speakers. Amongst the 65 million people who speak a language other than English, nearly 26 million report speaking English less than "very well."

The map currently focuses on the languages of California, Oregon, and Washington in 2020 wildfire-affected areas, but will be expanded to include other areas of the United States. 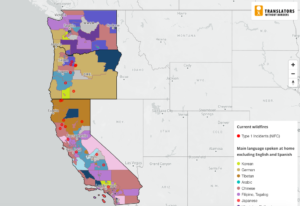 Other sources of language data
Wikipedia
US Census Bureau

Interactive map showing the languages spoken on the West Coast of the United States of America.