There are approximately 20 languages spoken in Ukraine. According to the 2001 census, 67% of the population speak Ukrainian and 30% speak Russian as their first language. Ukrainian, the official language, belongs with Russian and Belarusian to the East Slavic branch of the Slavic language family. Ukrainian is closely related to Russian but also has distinct similarities to the Polish language. Other significant minority languages in the country are Romanian (spoken by 7% of the population as a first or second language), Crimean Tatar (5%), Bulgarian (3%), Hungarian (3%), Armenian (1%) and Belarusian (1%).

While the 2001 census records 22,600 Romani speakers, the actual number is estimated to be much higher. The Ukrainian Parliament Commissioner for Human rights estimates that there are between 150,000 and 400,000 Roma across Ukraine.An unknown number of this group speak Romani as their first language. Many Roma don't publicly identify as Roma or lack identity documentation and are therefore not reflected in the official census data.

According to the constitution, the state has an obligation to ensure the comprehensive development and functioning of the Ukrainian language in all spheres of social life, while guaranteeing the free development, use and protection of the Russian language and other languages of national minorities. 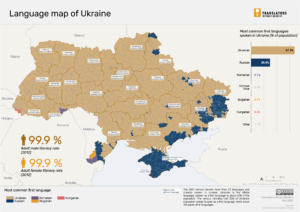 Static map highlighting the most common languages spoken in Ukraine. Data is from the 2001 census. 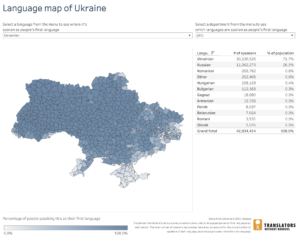 Interactive map showing the number of speakers and geographic spread of different languages in Ukraine. Data is from the 2001 census.

Our Field Guide to Interpreting in Polish is there to support humanitarian field managers, interpreters and cultural mediators in their daily interactions and responsibilities. It also helps better respond to the needs of people going through a crisis, so they could receive and share information in their own language.

TWB worked with CHS Alliance to translate Core Humanitarian Standard with Nine Commitments for organizations and individuals providing humanitarian assistance to be able to better respond to people affected by a crisis.